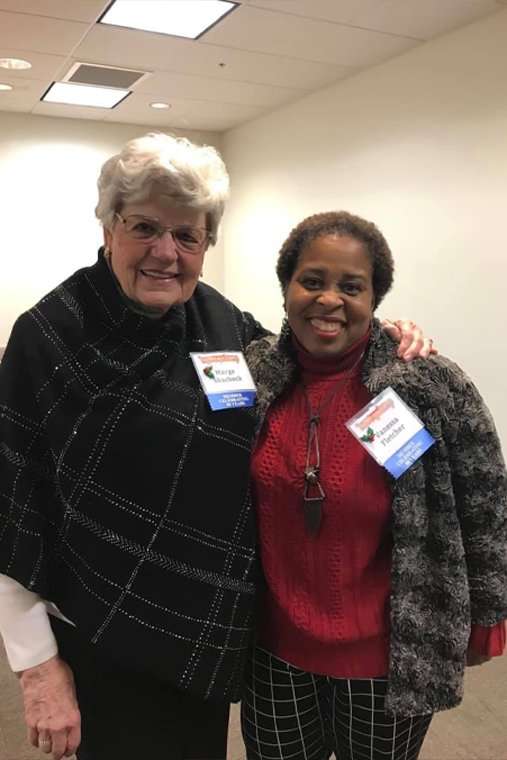 After decades in the early care and education field, Vanessa Fletcher spent more than four years as the school leader at Day Early Learning Lilly Family Center before her retirement. Now, Fletcher serves as an active member of the Day Nursery Auxiliary.

Vanessa Fletcher was very familiar with Day Early Learning when she became the school leader of the Lilly Family Center in 2013. She had most recently spent 15 years as the assistant director of Child Care Answers, a close partner of Early Learning Indiana.

After almost three decades in the industry, Fletcher felt she needed to refocus her attention back on working directly with families and children.

“I went to the Lilly Family Center because I felt that my years were coming to an end in the field of early child care,” Fletcher said of her transition to Day Early Learning. “I wanted to end my career working with children and families.”

During her time at Child Care Answers, Fletcher focused on advocacy and creating resources. While at Day Early Learning, Fletcher had an opportunity to be directly involved with making a difference for children and their families for more than four years.

“I often think about the parents and the connections I made with them,” Fletcher said of her fondest memories of working in early care and education. “Empowering parents to know that they are their child’s first teacher, to work alongside parents to advocate for their children, that was key for me.”

Leading the day-to-day operations of the Lilly Family Center, Fletcher had a front-row seat to the impact of the Day Nursery Auxiliary. The Auxiliary is a group of over 100 dedicated women who support Early Learning Indiana’s programs by raising money, providing volunteer services and acting as community ambassadors for high-quality early learning.

“I saw the Auxiliary giving so much of themselves to our centers, so I joined the group just two months after I retired,” Fletcher said of the decision to join the Auxiliary in May 2018. “I saw their mission to support our families, volunteer and advocate for young children. That seemed like the best transition for me.”

All members of the Auxiliary are passionate about early care and many are former teachers or professionals in the industry, including Fletcher. She takes an active role in coordination between Auxiliary volunteers and the Day Early Learning centers because she saw the value during her time leading the Lilly Family Center. Acts as small as going into a center to rock a baby or read a book are just as valuable as dollars raised.

To learn more about joining the Auxiliary, email Emily Nelson at emilyn@earlylearningindiana.org.